2.1. Together Nottinghamshire County Council and Nottingham City Council are developing a joint waste local plan. This will include policies to guide the future development and management of waste. The Plan needs to reflect other guidance and legislation that sets out waste policy at the international, and national level and which establishes the general principles of how we should manage our waste more sustainably.

2.2. There are two key principles that underpin waste planning which aim to promote the concept of waste as a resource, these are the Circular Economy and theWaste Hierarchy.

2.3. A circular economy is an alternative to a traditional linear economy (make, use, dispose) in which we keep resources in use for as long as possible, extract the maximum value from them whilst in use, then recover and regenerate products and materials at the end of their useful life. 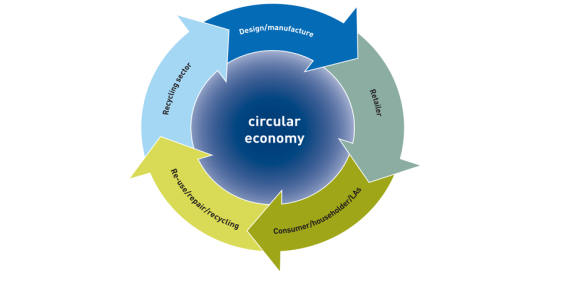 2.4. As well as creating new opportunities for growth, a more circular economy will:

2.5. A series of European Union (EU) directives set out the general principles for waste management. The Waste Framework Directive (2008), establishes the 'waste hierarchy' which prioritises the most beneficial ways of dealing with our waste. The concept aims to push waste management up the waste hierarchy by trying to prevent waste in the first instance and then examining the way we re-use the waste that is produced. Currently, most of the UK's environmental laws and policies are based on European laws. This is because, as a member of the European Union (EU), the UK is bound to apply EU environmental laws. Although the UK left the EU in January 2020, the Government has stated that there are unlikely to be any immediate changes to UK waste policy and targets, but this will be kept under review[1]. 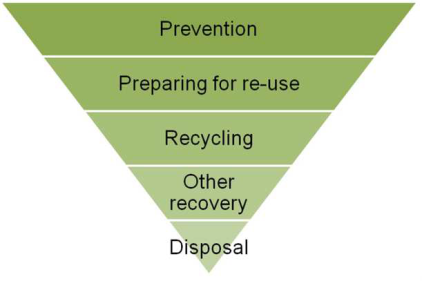 2.6. A key principle underpinning how we should manage waste – whether as a waste producer, the waste management industry, or as the Waste Planning Authority, is to follow the Waste Hierarchy shown above. This prioritises prevention as the most sustainable option, then encouraging re-use of existing products. Once products have become waste the next priority is to recycle them so that the raw materials can be re-processed into new products. Where this is not technically, or economically possible materials can still be recovered in some way e.g. anaerobic digestion of organic waste or incineration with energy recovery such as the Eastcroft facility in Nottingham which sustainably heats and powers homes and businesses. The least sustainable solution is disposal such as burning waste without capturing heat or energy or taking waste to landfill. However, both the hierarchy and national policy recognise that disposal still has a necessary role to play for residual waste that cannot be further recycled or recovered.

2.7. It is important to note that the Waste Local Plan can only deal with the facilities for preparing for re-use/recycling, recovery and disposal - prevention is more about manufacturing processes and consumer behaviour, such as choosing more sustainable options such as designing products so that they will last longer or can be repaired more easily or with less packaging etc. The new waste local plan deals with waste that has already been produced and there are many factors that influence waste production that is outside the remit of the waste local plan.

2.8. In addition to considering the context identified in the spatial portrait, the Plan must take account of existing national and local policy as summarised below.

2.10. These objectives complement wider environmental goals within the Government's 25 Year Environment Plan which aims to improve the UK environment within a generation. The Government has stated that the UK will be the first major economy to pass laws to end its contribution to global warming. The goal is to become net zero for all greenhouse gas emissions by 2050. Nottingham City Council is also aiming to be the first carbon neutral city in the country by 2028. Nottinghamshire County Council is currently developing its Corporate Environment Strategy to address these issues. The new Waste Local Plan, and future waste development, will therefore need to play its part in helping to meet national and local targets.

2.11. The current Waste Core Strategy was adopted in December 2013 and is now due for replacement. There are several stages in local plan preparation, as set out in Figure 3 below.

Figure 3 - Key stages in preparing the new Waste Local Plan – highlighting the early stage we are at.

2.12. This Issues and Options is the first stage of consultation on the Waste Local Plan. It has been prepared to:

2.13. As well as consulting on the content of the new plan a series of detailed technical assessments will also be carried out. These will cover issues such as social, economic and environmental impacts, transport and flood risk.