3. Setting the overall context for the Plan

3.1. To plan effectively for future waste management, we need to have a good understanding of the current situation and what is likely to change. We need to decide the most appropriate timescale for the plan and what it should cover.

Q1: We envisage the plan period covering up to 2038, do you think this is appropriate? If not, what other plan period should be used and why?

Overview of the Plan Area

3.2. To help inform the plan process we are developing a 'spatial portrait' of Nottinghamshire and Nottingham, setting out the key environmental, geological, geographic, social and economic influences found in the Plan Area.

3.3. The Plan area is part of the East Midlands and shares a boundary with South Yorkshire. Northern parts of Nottinghamshire therefore have significant employment, housing and business links with Sheffield and the metropolitan areas of Barnsley, Rotherham and Doncaster. The more urbanised west of the County is closely linked to neighbouring Derbyshire, with more rural eastern parts of the County having a similar character to neighbouring parts of Lincolnshire. In the south, Nottingham is the major regional centre with links to the neighbouring cities of Derby and Leicester. Consequently, there is a significant overlap of housing areas, business and employment between these three cities (see Plan1 below).

3.4. Nottingham City is a designated Core City of national importance and consists of a very compact and a high-density urban area. The City has a very tight urban boundary and is surrounded by several borough and district councils and their connecting urban areas.

3.5. There are around 823,000 people living in Nottinghamshire County and 330,000 in Nottingham City. Around two thirds of the overall population live in, or around, Nottingham which is a major centre for employment and retail. The remainder live in, or close to, the other main towns of Mansfield, Kirkby in Ashfield, Sutton in Ashfield, Hucknall, Worksop, Newark and Retford. Outside these urban areas, the rest of the County is largely rural with scattered small villages, farmland, woodland and commercial forestry.

3.6. The County's landscape is characterised by rich rolling farmlands to the south, with a central belt of mixed woodland and farmland, giving way to heathland in the north and open, flat agricultural landscapes dominated by the River Trent to the east. Nottinghamshire also supports a wide network of important sites for nature conservation, the most important focused within Sherwood Forest, to the north of Mansfield. This includes a Special Area of Conservation and possible future Special Protection Area, both of which hold international status.

3.8. Nottinghamshire's economy generally compares well to the rest of the UK, and some of our urban areas are expected to be the focus of significant housing and commercial development in the future. However, there are wide inequalities in the rates of employment and income across the plan area, most notably in the former mining areas to the north and west and within parts of Nottingham. These areas can also experience inequalities in health, education and skills.

3.9. Mansfield, Worksop and Newark are important centres for warehousing and distribution whilst service, technology and research-based industries tend to cluster in around Nottingham. The energy industry also has a role with four power stations along the River Trent, however, coal powered power stations are due to close or be replaced by 2025. Elsewhere, agriculture and forestry are no longer major employers but still make up much of the County's rural landscape.

3.1. As a regional economic hub, Nottingham City is the main work destination for the majority of residents living within the city and surrounding areas. Around 226,000 people are employed within Nottingham City. In and around Nottingham there is a strong focus for pharmaceuticals and optical goods, manufacturing, ICT technology and finance and banking.

3.2. Flood risk, particularly in the Trent Valley and along its tributaries, presents planning and environmental issues which is a significant constraint to most forms of built development. The expected impact of future climate change could result in higher rainfall and more extreme flood events. The whole of Nottingham City is covered by an Air Quality Management Area. 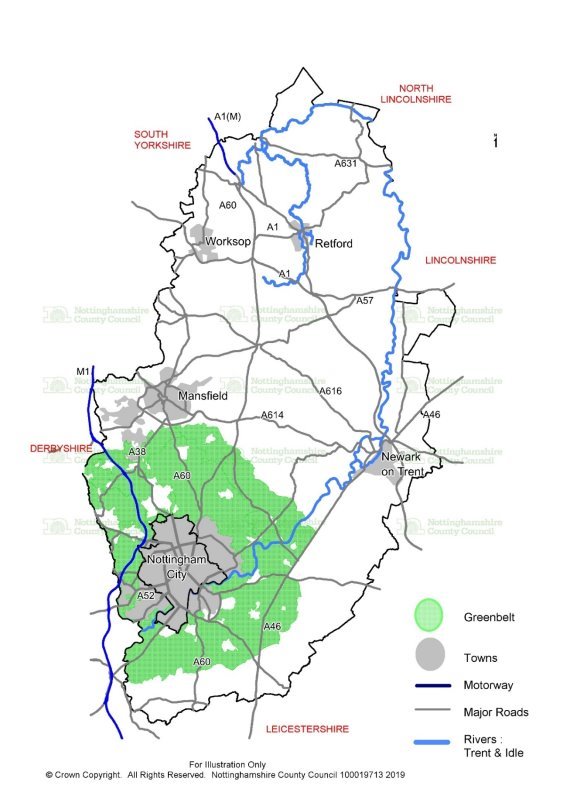 Q2: Do you think any further information should be included in the overview of the Plan area and the implications for the management of waste?